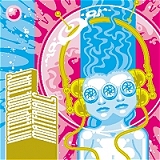 Twisting through a neighborhood of quasars on the other side of our galaxy we fall into "Interplanetary Materials". Colossal re-composition of the senses Doc Who style with a splash of Rimbaud. 36 artists. Double album action.

Artwork : All disc covers presented as both PDF and JPG files. Etherbrian has designed the disc covers to be available for slimline jewel cases, normal jewel cases and a double-disc jewel case (with additional art to be used with clear trays). So many choices await you!

Note: When printing the PDF files in Adobe Acrobat - once you click to print and the print confirm appears, uncheck the box that reads "Shrink oversized pages to paper size". This will ensure you will get the right sized printout.

Check out more information about this release and the artists involved on our Comfort Stand release page.

4 - Orbit Around The Moon

7 - They Dwell on Other Girls

9 - There's No Such Place As Outer Space

32 - Set The Controls For the Heart of the Sun

in other dimensions better music exists